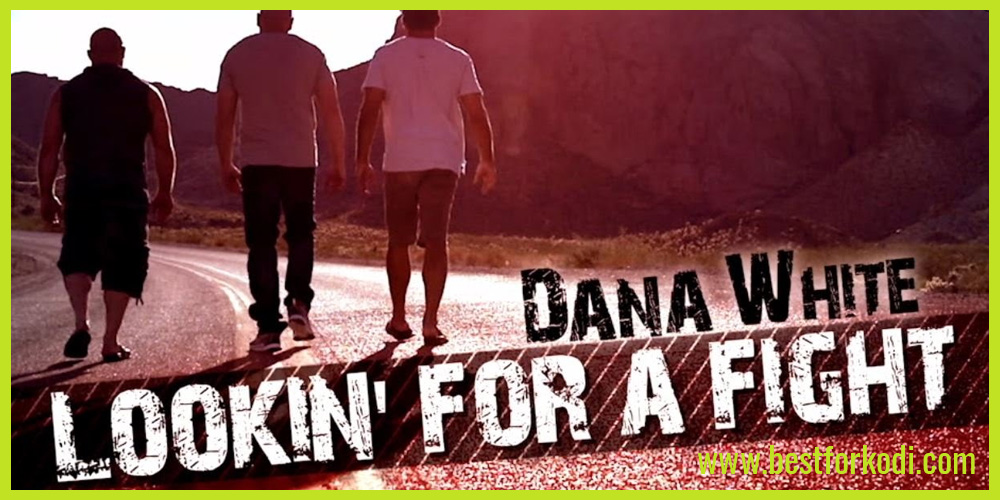 Dana White Lookin for a fight is the latest reality based type show from the UFC. Travelling up and down the country this monthly show takes you behind the scenes as Dana White looks for some up and coming fighters.

If you have never heard about Lookin’ for a fight you are in for a treat. This reality based programme follows UFC president Dana White as he travels around the county going to MMA events to see up and coming fighters.

This show is a little bit travel programme, a little bit reality show and basically a great insight into scouting talent.

Lookin for a fight is available via the official UFC YouTube channel and is released on a monthly basis.

So, you should have no problem finding them within Kodi, however we have also embedded them below from the official YouTube channel.

When Dana White took over the UFC in 2001, one of the new UFC President’s first tasks was to scour the MMA backwaters searching for undiscovered talent to sign to the UFC. White hasn’t scouted talent in person for over a decade – but with childhood friend Nick “The Tooth” and the irrepressible Matt Serra in tow – Dana hits the road once again in search of potential UFC superstars. This is the pilot episode “Dana White: Looking for a Fight.”

UFC President Dana White travels around the country with his friends, sampling the best in local food, fun and fights as he scouts up-and-coming MMA talent. In the first episode, the boys dine on cheese steaks, canolis and salt water taffy. Dana is impressed with a local fight card and in Philadelphia, a fighter surprises him with an unexpected challenge.

Matt, Dana and Nick endure sub-freezing temperatures in Alaska to go paddle boarding in Resurrection Bay and try dog sledding with an Iditarod champions. Matt shares some of his BJJ knowledge to local fighters and even rolls with Nick the Tooth. The boys check out a promotion called the AFC, and Dana is impressed with the up and coming MMA scene in Alaska.

Dana, Matt and Nick meetup in Las Vegas. Then they head to Kansas to do some farming, herd wild bison and to check out a fight. The guys then head back to Vegas so that Matt can ride shotgun in a trophy truck race. They all meet illusionist Criss Angel. The trip ends with them all checking out the UFC debut of Mickey Gall.

Matt, Nick and Dana head to Minneapolis to scout a heavyweight prospect at an action packed Legacy FC card. The boys also do some snowboarding. Visit a local BJJ gym and learn a death metal song from the band “Roads of Glass”.

The boys head to Houston, Texas for a trip like no other. The guys attempt to cowboy up on horseback and then upgrade to bull riding. They also meet up with former heavyweight boxing champion George Foreman. Make a batch of guacamole and check out a flyweight prospect at some local fights.

Dana and the guys head to Sioux Falls, South Dakota for a camping trip. Dana, Matt and Nick are completely out of their elements as they attempt to sleep outside. Afterwards, they head to a local fight so Dana can check out some prospects in action.

Keep checking back, will will update when more shows are released. Enjoy watching!