Follow this Guide to Install the Ezzerman Kodi 17 Build by our very own blogger Ezzerman, the Build is located in the community build section on the Wookie Wizard.

Good evening Guys and Girls. Have we got a treat for you!

Our very own Ezz brings his amazing build to Kodi 17. Ezz has blogged for this site from the very beginning 18 Months ago. He is very much a valued member of the Team. Ezz specialises in Build reviews and Skinning and he is our go to guy on these subjects. He has also worked in the background on other skins for a very well known build.

Ezz being Ezz never takes the credit for his amazing work. The best thing about Ezz’s builds is the effort he puts into the skin XML to make changes and his amazing Photoshop produced backgrounds. No Stock Google images here!!

This makes this build very personal and after looking around this superb build it very much reflects his personality. Lol

So lets get this baby installed, coming in at just over 200mb zipped this should install within minutes.

The Ezzerman build is a Wookie community build. So to get this build you first have to install the Wookie Wizard.

Now we have the Wookie wizard installed lets go to the wizard and install the Ezzerman build.

First scroll over to community build and click on that.

Then scroll to Ezzermans Build and click on install.

(Ignore Image below showing 400mb thats a stock image as forgot to screenshot it) The build is just over 200mb zipped.

Once Kodi has been closed down and you restart it, the build will be loaded. You will be greeted with the following screen. The Build is based on Aeon Nox 5 but unlike most builds the menu is at the top. I love this Sports screen a lot of time and effort has be put into it. The Gold is starting to grow on me to. Its Gold for a reason. Matches Ezz’s gold medallion ???? The Live Tv Section has all the big hitters. So glad he reads my Install guide reviews. The Kids section is packed with great addon’s to keep the little ones occupied for a few years!! The Music section has a great selection to and i think my favourite of the background images.

Below are a few more screenshots from the build. It Even has a Sci-Fi section which i have not seen in many builds before. The Wolf Pack has its very own section.This is a great addon for Movies and Tv Shows. The Amazing Bob Addon has its own section as well. Overall this is a very nice build which runs amazing on my PC. It also has Auto clean feature which it will do every time you reboot Kodi. So no having to worry to remember to clean cache ever again.

So if your liking the look of this Build then why not give it a go?

Lets us know what you think if you decide to give it a whirl.

So there you have it.

Whilst I am writing this would like to go on record to thank you all for your support. We are aware that we are a still a brand new site compared to some of the third party Kodi Websites. The site is still growing month on month. We really enjoy reading your comments on our twitter account all 45000 of you. if you don’t follow us you can do so by clicking HERE.

Why not Bookmark our page and check in with us on daily basis to see what new, or click and visit some of the companies that advertise on our site as income generated from these ads gets pumped back into the running costs of the site and will help us grow. 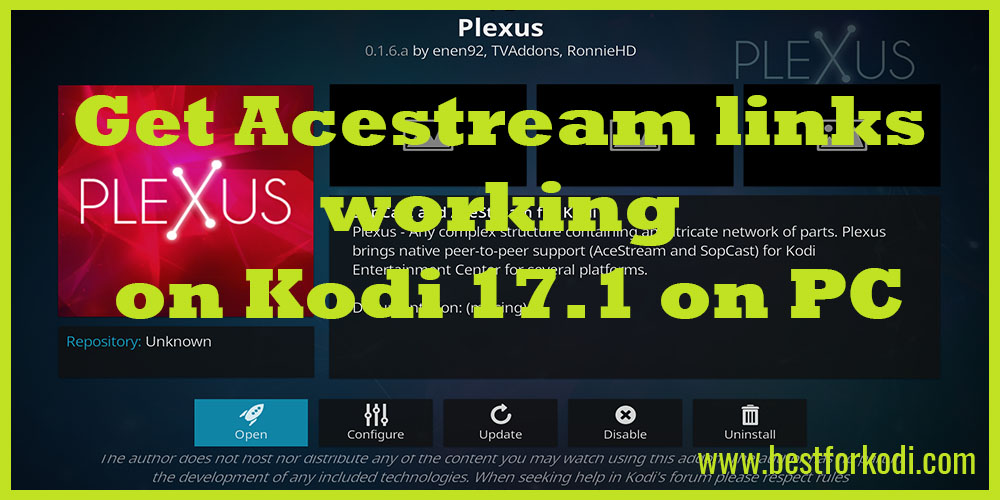 Install Ace Stream and Plexus on your PC
error: Alert: Content is protected !!